skip to main | skip to sidebar

Too little too late?

My band, The Velocet (which is currently on sabbatical), just released this new video for Concertina. It's directed rather wonderfully by the talented Mr. Bil Thompson and it's worth a view, even if you think we suck. Check it out on DailyMotion.com where it is presently the featured music video on their site.

Concertina
Uploaded by bilthompson
Posted by Fish at 9:45 AM 1 comment: so it occurred to me the other day that i have basically been on a 17-day bender. working in a bar four nights a week and then going out to other bars the three nights i'm off is the perfect formula for alcoholism. therefore i've decided to go on the wagon for one week, mainly to see if it's possible. today marks day four and truthfully i feel like licking a bum just for some of the run off. but i'm gonna stick with it, because i'm a disciplined individual, and god willing, i'll come out of this thing alive - and just in time for my 30th birthday next week, which may just be the greatest bender in the history of forever.
thank you for listening and god bless you.
Posted by Fish at 9:31 AM 4 comments:

One Tree Hill and The Velocet 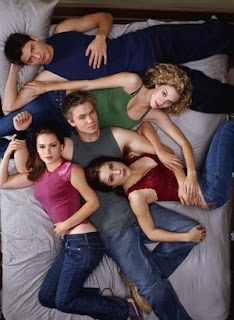 So next week (2/13 I believe) my band has a song on the show One Tree Hill. I've never seen a single episode of the show, but apparently it's very popular with the teeny boppers. I recently recorded an episode and attempted to view it. They began the episode with a "...previously on One Tree Hill..." montage and I, for a brief moment, thought that would be helpful in getting a gist for the program. Man, was I ever wrong. What followed was the longest, most overwrought, over dramatic, cluster fuck in the history of television. It started off simply enough: two high school kids playing basketball, maybe a little tension there, but then it just jumps right off a cliff. There was boy fights, girl fights, drunk driving, car accidents, teen pregnancy, tramp-stamping, two different marriage proposals, one acceptance, one shotgun wedding, and I'm pretty sure one guy died from a heart attack. All of this, mind you, occurred on the previous episode - or so they would lead you to believe. Needless to say, I gave up and threw my television out the window. But please, if you're a fan, watch next week and listen for "Chinatown." Then throw your TV out the window.
Posted by Fish at 11:09 AM 4 comments: 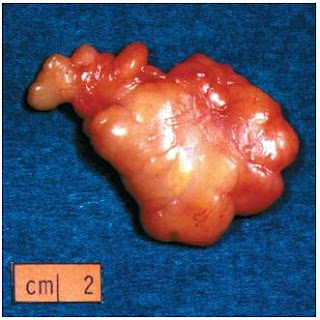 I've never understood the point of blogging. It's essentially public diary which, from my understanding, is used most often to convey feelings of dismay, personal grievances, and useless information on products and entertainment that one feels others simply must know. When I think of the word blog, two images come to mind: One is of a fat, goth-esque teenage girl in her bedroom, plastered with images of the guy from My Chemical Romance and other Tiger Beat sensations, crying and 'blogging' at the same time about some dude in her 7th period ceramics class who slipped a bunch of Lane Bryant advertisement clippings into her ironic Power Puff Girls pee-chee. The other is of the word blog itself, and that to me looks like a cross between a malignant tumor (see photo) and the stubborn turd that claimed Elvis' life. Needless to say, I've had only a few experiences with blogs and they've all been bad.

The first time I even heard the word 'blog' was when an acquaintance of mine from college (who will remain nameless) sent me a link to his blog circa 2003. I was immediately horrified by the lack of anything even remotely worth while in the 45+ pages of bullshit diatribe. I vowed never to read a blog again and so it remained until about a year ago when I stumbled across a girl's blog while 'googling' my band, The Velocet. Apparently this girl had attended the recent record release party for my band at Joe's Pub here in New York and her blog contained an entry commenting on the performance. Sadly our performance was marred with some disaster (namely some broken strings and two grotesque-looking groupies storming the stage) but otherwise it was a fine, sold-out performance at a great New York City venue. But that didn't stop 'Andy Secher' here from weighing in with her professional options about what a great rock show should and should not consist of.

Another friend of mine has his entire blog dedicated to art of reviewing sun tan lotion. Apparently being of German-Irish decent, and therefore more inclined to burn, makes you an expert on SPF technology. He literally posts a series of different sunscreens and then rates them according to the criteria he deems important. I asked him why his blog consisted of such an activity and he explained to me that he felt he was offering the world a unique service - that it was his duty, so to speak, to get this information to the public. And God bless 'em for that.

So now you're probably asking yourself, a) why the fuck are you now hosting a blog since you clearly despise them so much, and b) what'cha gonna blog about? Well, to answer the first question, I don't know. And as for the second one, I don't know either. I guess I just didn't want to be left in the dust. I never learned HTML and now I feel like a fucking dinosaur. I can't even animate a pair of a dancing baby .GIF's and juxtapose then next to a .JPEG of a cat wearing people clothes. I'm a failure. But God willing, I will learn how to blog - and find something substantial to blog about - and the world will be a better place.
Now, who wants to hear about the hot guy in my 4th period French class?
Posted by Fish at 9:02 AM 4 comments: